Punch was a weekly magazine published in Great Britain. The magazine was established in 1841, and was one of the most important satirical publications in the country for more than 100 years, even attracting followers from other countries. It is a real Pioneer of Cartoons. 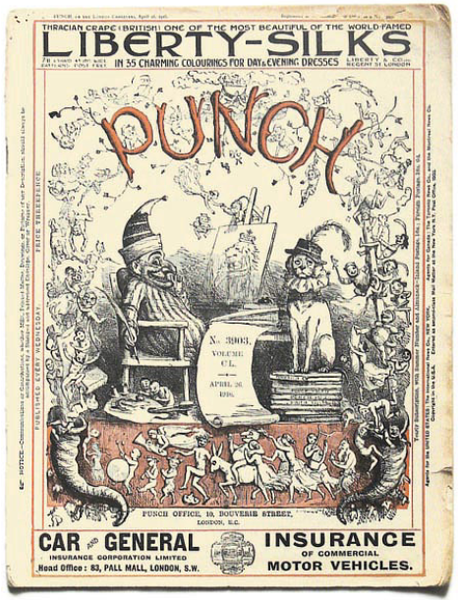 The magazine’s circulation peaked in the 1940s, before going into decline. In 1992 the magazine shut down briefly. Mohamed Al-Fayed made an abortive attempt to revive the magazine in 1996, but that attempt was unsuccessful and the magazine shut-down for good in 2002. The failure of the magazine can in many ways be attributed to the general difficulties of the magazine industry in today’s Internet-enabled world.
Punch Magazine was originally subtitled “The London Charivari”, a tip-of-the-hat to a French magazine that had a lot of satirical content. The magazine took a long time to gain popularity, but eventually it became a regular feature in the homes of higher class Englishmen, who appreciated the sophisticated humour and the lack of blatantly offensive content. The magazine can be credited with building public appreciation for “cartoons” as a form of comedic drawing. The magazine was full of line drawings and sketches commenting on the big issues of the day. These sketches were made possible thanks to the availability of new mass-printing technologies.
The readership of Punch included Charlotte Bronet, Queen Victoria, Emily Dickinson and Thomas Carlyle. The magazine is even credited with inspiring many new terms and phrases which are today considered a normal part of the English language.
In the 1940s, Punch reached the dizzying heights of 180,000 readers. By the 1950s, however, sales had started to decline. The popularity of magazines such as Private Eye, which featured a balance of articles and illustrations, led to the magazine’s eventual demise. Mohamed Al-Fayed lost money trying to resurrect the magazine, and when he chose to cease publication, there were only 6,000 subscribers remaining.