Cynthia Sheppard is a fantasy illustrator from Washington, D.C. she specializes in creating figurative art for video and tabletop games as well as books. She is able to create both digital works and oil paintings on paper and on boards.
Sheppard is a talented artist, capable of creating both realistic and abstract works. She has had work published in ImagineFX and Spectrum 17 and has worked with Zynga, Sinister Adventures, and Wizards of The Coast.
Honestly, her illustrations are far from illustrated maps or, say, cartoon illustrations. She has a strong following among Magic: The Gathering fans because of her creative designs, including the Rush of Blood oil painting : 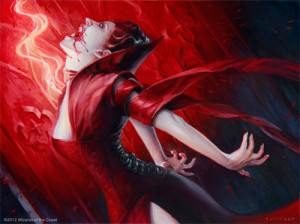 and the Bloodcrazed Neonate digital work. Her Magic: The Gathering card designs are some of the most popular ones in modern packs.
Sheppard is a particularly fan-friendly and accessible artist. She frequently attends conventions to show off her work, gives lectures, and meet fans. She even creates and shares videos of herself working, letting fans get a rare insight into the process of creating fantasy art. She is also an active blogger and can often be found sharing advice and tips with fellow artists online in various artistic communities.
Despite being an experienced artist, she believes that it is important to keep learning. She takes classes in painting and digital art regularly in order to improve her work and learn more about how to tell a story using illustrations. Fantasy art is a difficult niche, and Sheppard does a good job of creating powerful, bold images that evoke strong feelings without treading too far into the shock or gore qualities. She matches the tone and style of the universes that she works in well, handling angels, undead creatures such as zombies and vampires, and traditional fantasy creatures such as elves with equal ease.
In 2013, Sheppard made an appearance at the IlluXCon 6 Weekend Salon in Allentown, PA.